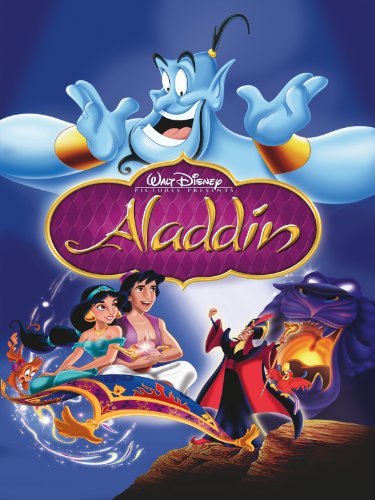 Overview: Aladdin is an orphaned teen running around Agrabah with his best friend and pet monkey Abu. He dreams of a better life inside the palace walls. Princess Jasmine, longing for a normal life outside of the palace walls, runs away from home and meets Aladdin. The two have a romantic moment, before being caught by the palace guards and he was arrested under the orders of Jafar. Jafar is the royal advisor and sorcerer, who is on a quest to find a magic lamp. Inside the lamp is a genie that will grant three wishes (within certain guidelines). Problem is the lamp lies in the Cave of Wonders and only a “diamond in the rough” can enter. Jafar tricks Aladdin into going inside to retrieve it, but Abu gets greedy and the Cave collapses. Aladdin rubs the lamp and becomes Genie’s master. They get out of the cave, and Aladdin starts to make his wishes, but finds that he just needs to be himself to get what he wants. Jafar learns Aladdin has the lamp and attempts to steal it, takes control over everything. Then makes a fatal mistake, that aids in his downfall and giving a happy ending.

Opinion: I love classic Disney. This was one of my favorites growing up. Jasmine has been my favorite Princess because she tried to stand up for herself. She still needed help being rescued, but she had tried to fight. Plus I always thought she was the most beautiful.

This is probably my first introduction to two of my favorite actors: Robin Williams and Gilbert Gottfried. I loved Iago’s crotchety anger and frustration, he was such a great comedic relief. Genie was amazing at moral fiber, and friendship. I don’t know why but Robin also brought a bit of a Jewish feel to his role. Maybe it has something to do with his freedom speech and wanting hummus, but I could be wrong.

My favorite song would have to be “Prince Ali.” Who doesn’t love a parade?

Then of course “Whole New World.” One of the most romantic songs ever.